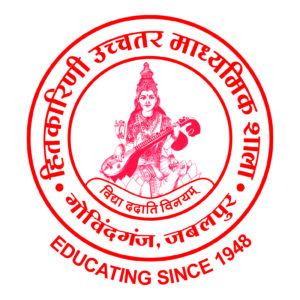 The renowned & oldest educational organization of Jabalpur city – Hitkarini Sabha established in 1868AD has been providing education to students of rural and urban areas to create sincere and better citizens. To accomplish this goal, Hitkarini Sabha set up schools in various residential areas of the city, as per requirement.

Following this sequence, a middle school under the name of Hitkarini Govindganj was established in the Milloniganj area on 16th August 1948. Later it was upgraded upto Higher Secondary level. Currently the school is running successfully under the name ‘Hitkarini Higher Secondary School, Govindganj’. It is spread over a large campus offering large play grounds and an environment conducive for learning. The school building have been upgraded and renovated, however, the original architecture and look has been maintained. The original building was built by the family of Raja Gokuldas, and his son Dewas Bahadur Jeewandas and nephew Deewan Bahadur Vallabhdas, as is evident from the ceremonial stone on the building.

Late Pandit Durga Prasad Awasthi was the first principal of the school.

Hitkarini School, Govindganj has been progressing ahead along with the other academic institutions of Hitkarini Sabha. Its alumni are well placed in various fields including politics, social service, teaching, journalism, etc.

Keeping with the societal needs of the time, an English medium school, Hitkarini Children Academy, Govindganj has been established with modern curriculum including an updated computer education curriculum.